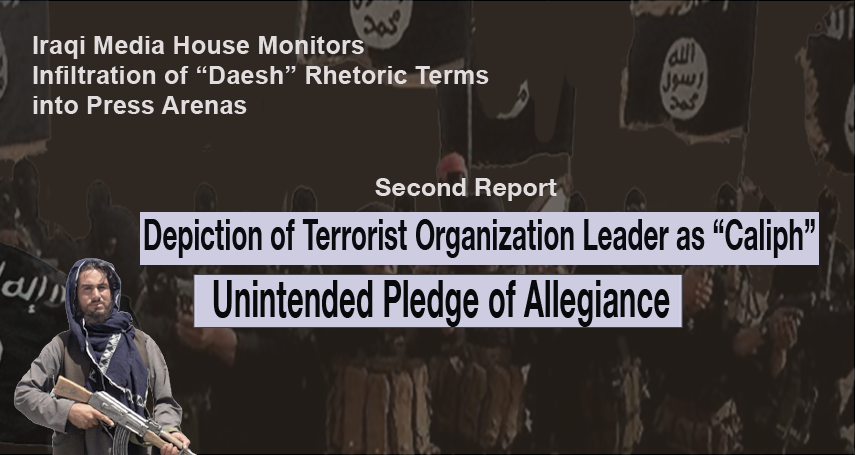 The Iraqi Media House ‘IMH’ monitors in its 61st report, the title used by Iraqi information media in their reference to ‘Ibrahim Awad Ibrahim Albadry’, the leader of “Daesh” Organization, who had bestowed himself with the title ‘Caliph’ under the nickname ‘Abu Bark Albaghdady ‘.

That all happened in mid 2014, when his militants managed to impose their power on Mosul  (the second largest city in Iraq) and declare the creation of  the so-called ‘Caliphate’ including large areas from Iraq  and Syria.

Since then, some Iraqi, Arab, and foreign Arabic mass media had been using such unfamiliar vocabulary as ‘Caliph, Caliphate’, in their different platforms, when referring in their stories to the organization leader or to the regions under his militant control.

Such terms seemed to have overshadowed the correct precise legal lexis that should be used in describing the leader of a terrorist organization or the regions that had fallen under the dominance of his followers.

Experts, legal, academic journalists, and others specialized in the Arabic language, referred to the seriousness of using such terms as “Caliph” and “Caliphate’. They suggested using the term “Organization leader’ instead of ‘Caliph’ and “territories under the organization’s dominance’ or any other precise term instead of ‘Caliphate’.

Their suggestion is attributed to the fact that the organization has been persistently seeking to win legitimacy from its proponents, and secure the religious and ideological justifications for the illicit practices and crimes committed by the organization and its leader in the name of Islamic religion.

Hence, the ‘Iraqi Media House’ had monitored samples from the media coverage achieved by different Iraqi, Arab and foreign information platforms; and analyzed all published materials as from the beginning of the events in August 2014 until the date of issuing this report.

The ‘IMH’ monitoring report reached the results to follow;

1- The report scrutinized  the extent of using the term ‘Caliph’ by some mass media in the course of their description of ‘Daesh’ leader, in a manner that can entirely cope with the orientations adopted by the extremist organization, which had  insistently focused through its media platforms on consecrating the legitimacy of its criminal practices.

The very same case is applicable to the term ‘Caliphate’ in reference to the regions that had fallen under the control of the organization.

2- Unjustifiable negligence on the part of the mass media of the legal term recognized by Iraqi and international laws in naming both the “organization’s leader”, and the territories under Daesh’ authority.

3- Some mass media put the terms ‘Caliph and Caliphate’ between quotation marks, in reference that they are foreign lexis, in an attempt to wash their hands of the moral responsibility of their media materials.

4- Most of the sample scrutinized used both terms without referring to their basic source, which is actually the statements and records issued by “Daesh” organization.

6- The absence of the common reporting orientation within some informational establishments, in terms of the rightful description of “Daesh” organization, insinuating the existence of different viewpoints, and absence of the administrative superintendence and the legal authority that can define the appropriate terms that can be suitably used.

1- It is necessary to revise the terms and titles used or devised by either the media or the advocates of the militant terrorist groups, to avert being a tool to propagate and disseminate the ideological ideas of such terrorist organizations.

2- In case of using the terms  “Caliph’ and “Caliphate”, it is imperative to refer that such terms are copied from the publications issued by “Daesh” or shed light on the ideological curriculum adopted by the organization.

3- Mass Media have to seek the advice of experts in the fields of law, and informatics to define the appropriate terms that should be used when reporting about terrorism, particularly during the times of human crises resulting from armed violence. This is because such issues have much sensitivity in the Middle Eastern conservative and traditional societies. It is also necessary to avert the common language used by the public.

4- Mass media establishments need to revise all their editing policies from time to time and set the common terms edited in their informational rhetoric. There is also need to diagnose any shortcoming or drawback and rectify it.

5- Legalists, syndicates, societies, and non-governmental organizations are recommended to confront the common lexical mistakes made in the media, and diagnose the lexis that can form the receivers’ consciousness and make them more ready to accept the extremist interpretations propagated by the terrorist groups, and consequently be more tolerant with the violations committed against the minorities of other religions.

Dr. Hashem Hassan (holds professorship degree in media philosophy, author and journalist since 1974, published several books, researches and thousands of articles and had presided over the Information College of Baghdad University for long years)

In the course of a study conducted for Iraqi Media Home, Dr. Hassan said, “Daesh took advantage of a thrilling emblem to arouse sensations and win more and more followers, and in the meantime terrify his opponent s through rhetorical language and terms borrowed from the Holy Quran and Prophetic sayings, aiming to create a stimulating picture that can enflame religious feelings.”

The media professor assures that any attempt to seek alternative lexis to replace Daesh terms is an ‘extremely sensitive issue’ and necessitates a thoughtful research in the Islamic heritage literature.

“Any attempt to find alternative contemporary terms must be made without arousing religious sensations and through moderate rhetoric that can gradually draw the carpet from underneath the feet of hate rhetoric promoters.”, Dr. Hassan emphatically added.

Dolphan Albarawarry (M.A. in Law, investigative journalist and head of the volunteering lawyers’ network of defending freedom of speech)

The word ‘Khalipha’ means a ruler succeeding another and it was used in the religious literatures of Islam to describe Prophet Mohamed’s successor in running Moslems’ affairs. It was then named ‘Imamate’; this is ‘leadership’ of Moslems and the “Imam’ is the supreme leader of the Islamic country.

The two terms, ’Khalipha’ and Khilapha’ have actually no legal conformity as per the modern international law principles, according to which countries are classified in conformity with their political regime (republican, monarchal), where the supreme leader takes over either by inheritance as in the monarchal countries, or through public elections as in republican regimes.

Meanwhile, the usage of the terms ’Khalipha’ and Khilapha’  provides an ideological and religious justification to the organization and its leader and gives reason for the many appalling crimes committed by them, all in the name of the Islamic faith. That might also arouse the rage of the Moslems, who see that the organization does represent the genuine tolerant spirit of Islam in any way.

’Khalipha’ and Khilapha’ in Language

Dr. Ahmad Hussein Alzoffery (professor of Arabic language and academician with a number of articles and media studies)

Linguistic definition of the name ’Khalipha’ (so-and-so succeeds so-and-so, if he is his successor. It is said: ‘’came after him to lead his people in Khilapha’; and in the holy Quran: ‘Musa said to his brother Harun ‘be my successor to my people’.

The name also denotes to the successor of Prophet Mohamed (peace be upon him) who took the reins of the Islamic state after him.

And in the light of the above definitions, noteworthy is that the connotation of ‘Khilapha’conveys a religious and ideological idea, signifying the existence of a theocratic rule with a heavenly legitimacy.

Thus, the usage of the term ‘Khalipha’ gives the impression that the chief or leader of the terrorist movement has the right to take his religious authority as the Prophet’s successor, whereas he represents a militant criminal terrorist group which had committed all crimes.

Firstly, instances of the mass media using the terms “Khalipha’ and ‘Khilapha’

-      “Daesh” justifies the wearing of black turban in Mosul

-      “Daesh” threatens to declare the Islamic “Khilapha” in America

-      Abdullah Alkhurbeit to Degla: the “Khilapha” collapsed and “Daesh” has not ended yet

-      “Daesh”  kidnaps 25 civilians from Kirkuk, being accused of quitting the “Khilapha” territory

-      Syria …. Area of “Caliphate State” declines to less than one square kilometer

-      “Daesh” kidnaps 55 civilians in Al-Huwega, being accused of leaving land to “Caliphate State”

-      Arrest  of terrorists from ‘Soldiers of the Caliphate’ in ‘Alsflaweya’

-      From atheism to “Daesh”… Having surrendered, ‘Monsef Almo’ataz’ narrates his story with “Khalipha” and how he turned into a terrorist!

-      Civilians working with ‘Daesh Caliphate’ … Who are they and do they constitute any danger?

-      Year after Daesh Caliphate: Iraq fails to count victims… Normal life may require whole decade to be back

Secondly: Instances of the usage of the terms “Khalipha and Khilapha” in ‘Daesh’ media

On the 29th of June 2014, and after Daesh imposed its control on Mosul, the largest city in Iraq, the organization used for the first time ever the term “Khilapha’ and declared the creation of the so-called “Islamic Caliphate”, including the regions under their control.

On that very same date, their leader was dubbed for the first time as “Moslems’ Khalipha’ through a recorded audio message attributed to the organization and downloaded on the internet. They declared the change of its name from the Islamic State in Iraq and the Levant ‘ISIL’ into the “Islamic State’ only. On the 5th of July 2014 the organization’s leader appeared for the first time on a pictured video on the internet. Later on, he delivered a speech in Mosul’s big mosque. The media materials produced by Daesh media focused on the personality of their leader who had overnight given himself the title of ‘Khalipha’, who should be followed and obeyed.

Thirdly: Instances of the usage of the terms “Khalipha’ and “Khilapha” in the Arab and foreign media transmitting in Arabic

-      “Daesh” prepares to establish the Caliphate State in West Africa

-      Daesh establishes the seed of  Caliphate

- The “State’s caliph” killed but the state organization remained alive

-  Immigration to “Daesh Caliphate” between temptation and     suspicion

-      “Caliphate” of Islamic State comes to an end, but suffering of missing ones continues